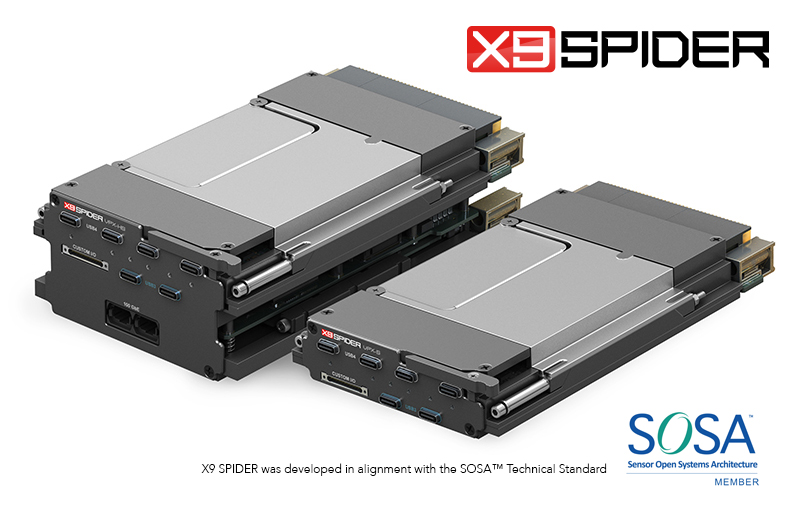 Washington D.C., October 11, 2021–General Micro Systems today launched two MOSA-inspired 3U OpenVPX “single board systems” with more processing, storage and I/O than is available in 6U-sized boards twice the size. Based on an Intel® 11th gen Tiger Lake-H 8 core Core i7 CPU with 64GB of memory, X9 SPIDER VPX boards are available in conduction- and air-cooled versions. Both products are intended for deployed military and aerospace or rugged applications and were designed in alignment with The Open Group Sensor Open Systems Architecture (SOSA™) technical standard.

Unique to these modules is a massive I/O bandwidth via multiple sealed USB4 and 100Gbit Ethernet ports—up to 455Gbps—that frees designers from the bottlenecks of the OpenVPX backplane, yet they remain interoperable with other industry vendors’ boards and systems. Also available are up to four on-board SSDs for embedded RAID data storage, two PCIe-Mini sites, plus an add-in NVIDIA® RTX5000GPGPU artificial intelligence (AI) co-processor and a 12VDC-only scalable architecture that transcends the restrictive OpenVPX bus. One GMS module set literally replaces an entire chassis worth of OpenVPX modules.

“The upside of OpenVPX and SOSA is interoperability and the spirit of the DoD’s push towards a modular open standards approach (MOSA), but the backplane can also be restrictive for I/O, bandwidth and upgradeability,” says Ben Sharfi, GMS founder and chief architect. “Our X9 SPIDER VPX-HS and VPX-S modules provide 455Gbps of beyond-the-backplane I/O, patented cooling, sealed USB4/Thunderbolt4™ and scalability. Even though they’re SOSA aligned and interoperable, we also provide the industry’s highest-performance features and a path for system-level technology refresh with CPU and pinout upgrades that avoid backplane re-spins.”

The conduction-cooled “single board system” modules are so densely packed that they can replace an entire chassis of 6U boards, yet are so interoperable that they connect with any USB4- or Ethernet-equipped system. Cooling the dense modules is accomplished via GMS patented RuggedCool™ and RuggedCool2™ hot spot cooling, floating heat plane, and multi-link 3-side cooling wedgelocks. Collectively, these cooling solutions provide over 100W+ of cooling per 3U OpenVPX slot.

What makes the X9 SPIDER VPX boards unique in the industry is not one thing: it is everything. At the core, the boards use Intel’s® latest 11th-generation Tiger Lake-H 8-core CPU with up to 64GB of ECC protected and upgradeable DDR4 DRAM. PCIe Gen 4 on-board fabrics move data to the backplane and the 100 Gb Ethernet “fat pipe” ports at 16GT/s with ultra-low latency. As a SOSA-aligned payload profile board, all mandatory I/O is present on the P0-P2 connectors, making the board backplane interoperable with other vendors and in spirit with the “DoD’s Tri-Service memo” requiring a Modular Open Standards Approach (MOSA) to systems design.

It’s hard to think of an electronics open standard more common than USB, and X9 SPIDER  VPX-HS and -S use four plug-and-play sealed USB4 40Gbps Type-C ports with Power Delivery. These ports not only transmit and receive 40Gbps high-bandwidth off-board data via the front panel, but provide Power Delivery up to 100W+ that can power a distant sensor or entire embedded system, simplifying system architecture design and cables, while saving weight by alleviating a distant system’s power supply. GMS provides custom rugged or sealed IP-rated cables (copper or fiber, with optional power) for out-of-the-chassis connections to 38999 mil-circular.

For highest speed and long-haul data movement, the X9 SPIDER VPX-HS is also equipped with dual 100Gbps Ethernet (fiber, 1km) ports. These dual “fat pipes” are an ideal way to create inter-chassis architectures, dual redundancy, or merely to increase by 10x (per port) the limited 10Gb Ethernet available on the OpenVPX backplane. 100Gb Ethernet is an unheard-of feature on 3U OpenVPX modules and X9 SPIDER VPX-HS has two.

Tech Refresh via Backplane Upgrades, Plus Scalable Beyond the Box

As described, both X9 SPIDER VPX modules are well-equipped with system-level features that allow designers to replace many existing boards with just one GMS X9 SPIDER module set. But the sheer functional density of the modules, plus the sealed quad USB4 ports, allow the modules to work stand-alone, outside of an OpenVPX chassis. In fact, the entire X9 SPIDER architecture is designed to be used as a MOSA open standards module in SOSA-aligned OpenVPX form, or in alternate, interconnected, and upgradeable configurations connected via plug-and-play USB4 40Gbps ports. Consult GMS for additional details.