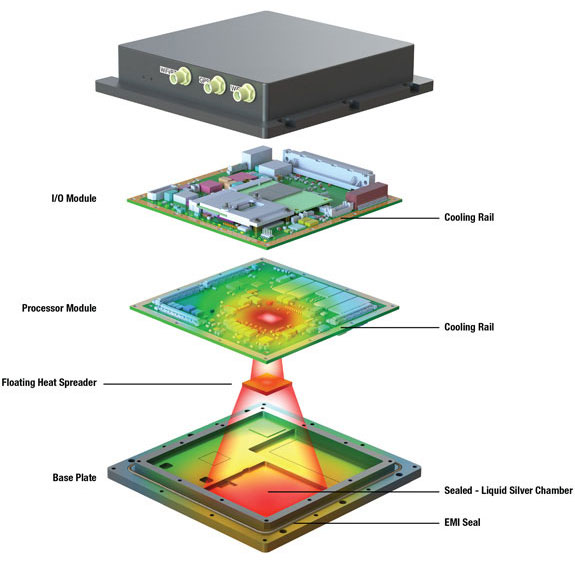 All General Micro Systems' products are equipped with GMS’ patent pending RuggedCool™ technology, which is the most unique cooling system in the industry. This one-of-a-kind cooling technology is the only cooling method that allows systems using Intel-based CPUs with a TjMax of 105°C to operate in an industrial temperature environment (-40°C to +85°C) at full operational load without throttling the CPU!

Instead of using thermal gap pads to conduct heat from the CPU to the system’s interface to the cold plate, as is done by all other rugged computer system manufacturers, GMS uses an exclusive technology that employs a corrugated alloy slug with an extremely low thermal resistance to act as a heat spreader at the processor die. Once the heat is spread over a much larger area, a liquid silver compound in a sealed chamber is used to transfer the heat from the spreader to the systems’ enclosure. This approach yields a temperature delta of less than 10°C from the CPU core to the cold plate, compared with more than 25°C for other manufacturers’ systems.

Shock and Vibration
Another advantage of RuggedCool™ technology is its effect on shock and vibration. With this technology, the CPU die does not make direct contact with the system enclosure, but rather connects via a liquid silver chamber which acts as a shock absorber. This shock absorber prevents shock from being transferred from the enclosure to the flip chip ball grid array (FCBGA), thus saving the CPU from micro-fractures (which in time cause the CPU to fail). The added thermal valve for GMS cooling allows any GMS system to operate at higher shock and vibration specifications than any other system manufacturer in the industry.  The U.S. Army has deployed thousands of units of the Golden-Eye III in vehicles for the Army’s Warfighter Information Network – Tactical (WIN-T).

Conduction Cooled From The Ground Up
The other distinct element of GMS’ cooling approach is that each electronics module in the system is designed from the ground up to be conduction cooled and to meet rugged MIL standards, such as MIL-STD-810G, MIL-S-901D, MIL-STD-1275E, MIL-STD-461F and DO-160D, to mention a few. All other manufacturers take commercial hardware, such as PC-104® and COM Express®, and add cooling plates in order to produce conduction-cooled systems. This results in poor cooling and poor ruggedness performance. In this approach, heat-producing devices other than the CPU are cooled by the CPU’s thermal conduction path. This is in direct opposition to the desired goal of drawing heat away from the CPU! Also, all GMS products include printed circuit boards that utilize multiple power and ground planes, with specific design techniques for optimizing the heat flow from the CPU and other high-power dissipation devices to the system’s enclosure. For more information about how this technology works, contact your local GMS representative and request a demonstration.