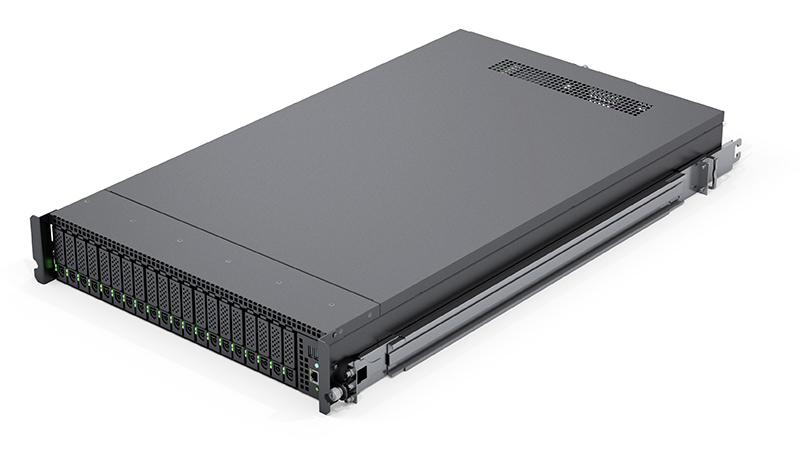 Velocity is designed from the ground up to balance the information flow through the server, with data moving:

The Velocity server is available off-the-shelf. The need for extreme “right now!” edge computing and on-platform AI algorithm data processing is acute, as Army programs like Project Quarterback, ATLAS, NGCV and other Futures Command projects demand real-time decisions and multi-platform sensor sharing. Sending data for processing back to a command post, to the cloud, or to CONUS is just too slow and the data links too congested.

“When we worked with the Army to provide the sensor local area network, server processor and intelligent displays for the Multi-Function Video Display (MVD) mine-clearing program on MRAPs, we saw first-hand the insatiable desire for more and more on-platform processing,” said Ben Sharfi, founder and chief architect, GMS. “The “4x4” Quad AI GPGPU server was born from what GMS learned working with the Army on MVD and follow-on programs. It was equally inspired by the airborne GMS TITAN CSSP and CSVP conduction-cooled 2U servers used in the Navy’s P-8 Poseidon aircraft. In fact, the “4x4” Quad AI GPGPU server shares a similar commercial architecture with the Navy’s GMS servers, used to run the Minotaur software mission system for Maritime Patrol and Reconnaissance. Both Army and Navy systems require massive AI workloads in very small racks. Both programs rely on GMS servers.

“With only a tiny 2U slot available, we’re providing four of NVIDIA’s latest-available Ampere GPGPUs, four of Intel’s best data center CPUs, 16 100Gigabit Mellanox Ethernet ports and 264TB of NVMe storage controlled by Broadcom RAID,” Sharfi added. “This is more than what anyone’s seen on the battlefield to-date—in only 2U. As an example, in real time, the “4x4” Quad AI Velocity server can accept high resolution image data from 1600 1Gbit high-resolution sensors, and then process, analyze, and perform Fast Fourier Transforms for frequency domain calculation before converting the data back into the time domain, and storing 264TB of it. The capabilities of the Velocity 2U are vastly beyond what the military has seen previously on the battlefield.”

Key performance specifications for the Velocity 2U server include:

GMS’s proven RuggedDNA™ cooling, packaging and ruggedization techniques are carried forward into Velocity “4x4” servers from 40 years of military deployed VME, VPX and small form-factor systems. The servers exceed typical data center specs for extended temperature, high shock, and vibration, and are ideal for both fixed location and mobile (vehicle) applications. The servers can operate over a wider

-20°C to +75 °C temperature range while offering the long‑life expectancy required for Department of Defense (DoD), government, or other high-availability and high-reliability applications.

The Velocity server is one of a family of 1U and 2U rugged servers. All Velocity and sister shortrack Vortex server variants have a 1GbE LAN port, console video, optional hardware or software RAID, a BMC with dedicated Ethernet port, TPM, and optional 10/40 GbE (copper or fiber). A DVD/Blu-ray drive is also optional, as are serial ports and audio I/O. Single or dual-redundant power supplies are standard, in 110 VAC or 220 VAC, plus select DC voltages.  Optional features like zeroize via GMS SecureDNA™ or hardware secure erase via FIPS-140 or Opal 197 drives, allows for crypto data-at-rest on the removable SSD media.

GMS has proudly designed the Velocity and Vortex servers in America with the same design ethos as the company’s successful MIL-SPEC conduction-cooled TITAN 1U and 2U servers, and GMS’ deployed conduction-cooled small form factor (SFF) chassis and systems. In the Velocity servers, however, TwoCool™ BMC-controlled fans mitigate heat reliably while minimizing costs.